One of my favorite genre of books is historical fiction, so when Elizabeth Bell contacted me to create a candle for her book, Necessary Sins, I was so excited to read her book.

What I found on the pages of this book was a beautiful story that spans across the generations of family who's lives haven't turned out as they hoped or expected.

What I loved: I felt this story was excellently researched. I could imagine each setting, understand the religious nuances and not feel like I was being "schooled". Elizabeth did an amazing job of using her research to create a well crafted story!

What I liked: The complex characters who could hold their own on the page. I liked so many of the characters who brought this story to life. They are flawed and real and you grew to care about them.

Recommendation: I would recommend this book to anyone who loves historical fiction. There are some similarities to The Thorn Birds, so if you loved that you'll love this. If you love a book that has a balance of great characters and well researched details, you'll love this book. 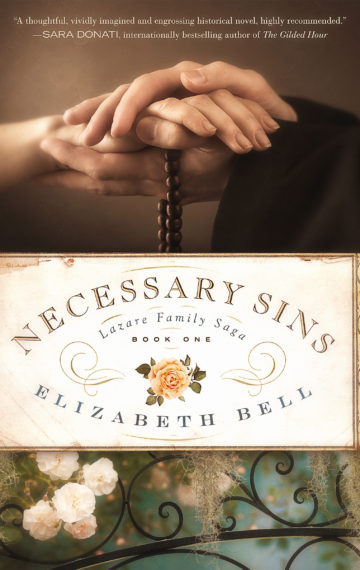 Today I am joined by Elizabeth Bell so we can get to know her better and learn more about her beautiful novel, Necessary Sins.

Hi Elizabeth! Thanks so much for taking the time to talk with me today!

I’m so excited to be talking with you today about your new book, Necessary Sins. I know you have been writing this story since you were 14 (and you just turned 40 – Happy Birthday!). The book is full of intricately weaved story lines about some very specific points in our history. Can you tell us which story line started it all and how the story evolved over the past couple decades for you?

The story line that started it all barely made it into this first book in the series! At age 14, I was living in Colorado, which inspired the Western part of this saga. The American West will be the setting for much of Books 2 and 4. The very first scenes I wrote were about the McAllister family on the Overland (a.k.a. Oregon) Trail and the tragedies that left Joseph’s young nephew David to fend for himself. The story evolved by growing backwards generationally. It took me a long time to figure out where this family began in a narrative sense. David, Clare, and a third character were my original focus. Joseph and Tessa were merely supporting characters who loved each other but never did anything about it. I thought Joseph was my starting point until I realized no, it’s Joseph’s great-grandmother Marguerite who sets it all in motion and changes this family’s destiny during the Haitian Revolution.

Not only did you start this story at a young age, you decided pretty quickly to write under a pen name. What brought on that decision?

Honestly, it was just dissatisfaction with my given name. In my generation, there were Jennifers everywhere. In high school, I had an advanced-level French class with five students in it—and three of us were Jennifers! I got tired of turning my head every time someone said “Jennifer” or “Jenny.” They usually weren’t talking about me. I was an individual. I wanted a unique name that reflected that. In my pen name, Elizabeth honors the Victorian romantic poet Elizabeth Barrett Browning, and Bell was the pen name used by the Brontë sisters.

Back to the book! One of the things I loved about the book was the level of research you did to bring the story to life. From botany to history to religion – you covered many topic areas! How did all of the research impact your writing process?

In one sense, the research slowed down my writing process. I’ve spent much more time researching than writing. But the characters, the plot, they come from the research. I felt like this story didn’t really take off till I reached a critical mass in my understanding of the time period, Catholicism, slavery, and the other major subjects I was tackling. Something like botany drove the story less, but when I came to a scene where I needed to know more about, say, antique roses, I’d have to hit pause on the writing and hunt down the sources I needed, often through Interlibrary Loan.

There are a lot of important characters in the story, but I want to focus on one for this question – Father Joseph. Honestly, he made me nuts sometimes with his staunch inflexibility! LOL! However, this behavior stems from a turning point earlier in his life – based on a misconception and skewed information. As you wrote the story, did you wonder how Joseph would be received by readers?

In all honesty, I was shocked the first time a reader told me she disliked Joseph! To me, he is profoundly sympathetic and lovable. I think it’s because he’s like my child. Even when he grows into manhood in the story, I’m still seeing the frightened, confused little boy in him. Admittedly, I want to take him by the shoulders and shake some sense into him. But mostly, I just want to give him a hug and a pep talk. His motives are good; he’s always trying to do the right thing, even if his adherence to Catholic dogma ends up causing harm. For Joseph, if the Church says something is true, then it’s true, end of story. I myself grew up in a Protestant but fairly fundamentalist household, so I understand first-hand how religious belief can color every thought and every decision you make and how hard it is to break away from that. Growing up in a racist world skews your thought processes even worse. It’ll be a long road for Joseph as he learns to question what he’s been told and make decisions for himself.

Gardens and plants play a big role as a part of the setting in the story. So much so we created a candle inspired by garden scents! There are so many themes tied to gardens – what did the gardens represent to you as wrote the story?

To me, gardens are very sexy. They are life and abundance, barely contained. This is an ancient idea, used memorably in the Song of Solomon, or the Canticle of Canticles as Catholics call it. Flowers in particular are symbolic of female sexuality: our desire, generosity, and satisfaction. I’ll explore that more in the rest of my saga. I’m thrilled that we ended up with a luscious, heady floral scent for my candle.

This story is a love story, a family drama, a tale of discrimination…the description of it as an “epic saga” is spot on! Can you tell us what’s next in the series?

This is so hard to do without major spoilers… The story of Joseph’s generation will mostly conclude in Book 2, and then I’ll focus on the next generation: David, Clare, and a third major character. David has been lying about what happened on the Overland Trail. Book 2’s title is Lost Saints, a phrase I borrowed from an Elizabeth Barrett Browning poem: “I love thee with a love I seemed to lose/ With my lost saints.” The title has multiple meanings. Half the novel takes place in the American West, partly from ten-year-old David’s point of view and then following a character who’s been “lost” to the Charleston characters. But what’s lost can sometimes be found…

Before we wrap things up, tell us what online or in person events you have coming up!

Well, I’ve just concluded my major launch events for Necessary Sins. Next, I’ll be focusing on polishing and publishing Book 2, Lost Saints! Facebook is my main social media platform, but it isn’t wholly reliable, so the best way to hear about events is to sign up for my newsletter: https://elizabethbellauthor.com/my-newsletter/

Thanks again for taking the time to chat with us today! I hope everyone will check out Necessary Sins!