With Halloween right around the corner, I thought I’d share three of my favorite cosplay costume ideas from Game of Thrones.

Embrace your inner Dragon Queen with this Daenerys Targaryen costume.

I have this costume, myself, and wore it for Halloween two years ago! And yes, my hubby is Jon Snow! 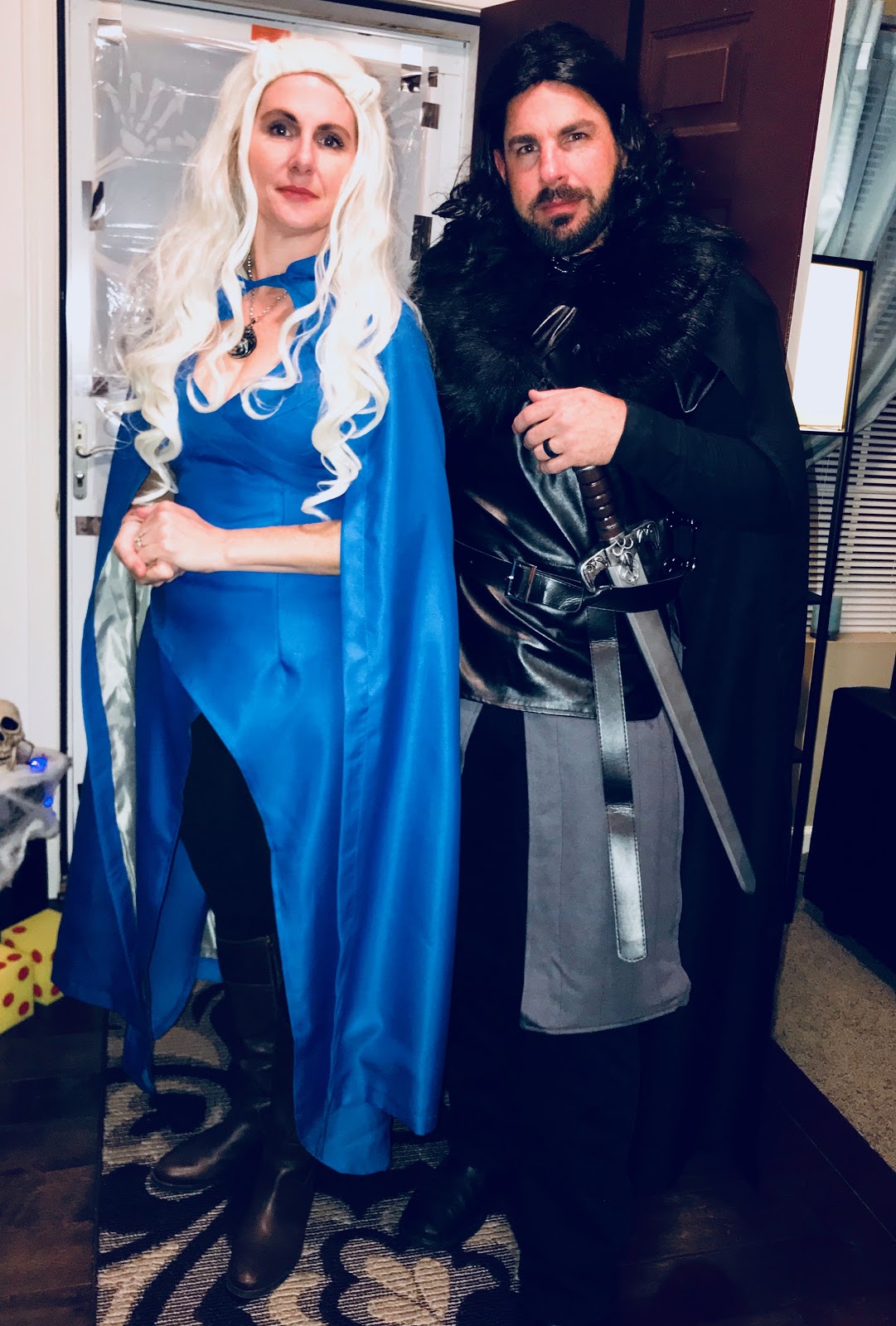 Inspiration: I’m a huge GOT fan and I thought who better to be than the Mother of Dragons. My main inspiration for this costume is Daenerys’ self-assuredness and power that only grows throughout the show. I mean...just take a look at this bad-ass speech she gave when first meeting Jon Snow in “The Queen’s Justice” (Season 7, Episode 3):

"I spent my life in foreign lands. So many men have tried to kill me, I don't remember all their names. I have been sold like a broodmare. I've been chained and betrayed, raped and defiled. Do you know what kept me standing through all those years in exile? Faith. Not in any gods. Not in myths and legends. In myself. In Daenerys Targaryen. The world hadn't seen a dragon in centuries until my children were born. The Dothraki hadn't crossed the sea. Any sea. They did for me. I was born to rule the Seven Kingdoms, and I will."

Supplies: Although this is not the outfit Daenerys wears while giving that speech, this is her most famous outfit that she wore to free the slaves in “Vengeance is Everybody’s” (Season 3, Episode 4). I wore this blue tunic over black skinny pants and with black boots. I then paired the outfit with this light blonde wig from Amazon.

Time it takes: After ordering and receiving the tunic and wig, luckily I had black pants and boots that I paired with my costume to complete it. The most challenging part of this costume was getting the wig to stay on securely, but I quickly learned to fasten it to my wig cap with hidden bobby pins! And the best part of this costume is that it was comfy and not something I had to manage at our annual neighborhood party.

Jon Snow, King of the North, is also a good choice if you’re feeling up to battling some White Walkers!

He’s such a strong male lead in the show who shows us that it’s possible to have both a good heart and the heart of a warrior.

Inspiration: My inspiration for this costume was this quote from “The Wars to Come” (Season 5, Episode 1) when Jon realizes that the Wildlings were not the true enemy and became an advocate for them:

“They were born on the wrong side of the Wall — doesn’t make them monsters.”

Supplies: Both the black tunic and wig can be found on Amazon, which I would recommend pairing with black pants and black boots. For added flair, Amazon has a very good replica of Jon’s Longclaw Sword of Valyrian Steel, but it is pretty pricey! Youtube also has great tutorials on how to create your very own replica, like this wooden DIY one here!

Time it takes: Ordering and receiving the tunic and wig is the fastest part of this process. If you decide to create your own replica of his sword, that’s where most of your time will be spent on this costume! I found a cool Youtube tutorial on how to create a wooden replica of Jon’s sword and although it looks a little bit time-consuming, the end result looks worth it, though! After all, you will be The Bastard of Winterfell, The White Wolf, He Who Has Never Met a Girl He Liked More Than His Own Hair… We ended up getting an alternate sword that worked just fine!

Cersei Lannister, a queen who always paid her debts...even if you didn't like the payment!

Cersei was one of the most dastardly characters on GOT. She wore her bruises as badges of honor and although Robert Baratheon wounded her physically, he couldn’t wound her pride! But she also wasn't afraid to get dirty to get what she wanted. You have to love to hate Cersei!

Inspiration: My inspiration for this costume comes from a quote by Cersei in “The Night Lands” (Season 2, Episode 2), that she powerfully declared to Tyrion Lannister when defending Joffrey’s brutal ways:

“You want to be Hand of the King? You want to rule? This is what ruling is; lying on a bed of weeds, ripping them out by the root, one by one, before they strangle you in your sleep!”

Supplies: Cosermart sells a really good replica of Cersei’s red dress down to the very last detail of embroidery. If this is out of your price range, Amazon sells an affordable version of her dress that is just as recognizable. The good thing about the costume from Amazon is that it comes with the dress, corset, and half-crown. Amazon also sells an accurate Cersei wig for this costume.

Time it takes: This costume should take no time at all to put together once you’ve got your dress and wig in hand. You can wear any shoes with this costume as the dress will most likely cover your feet.

So what do you think? Are you ready to head back to Westeros or The Wall this Halloween?